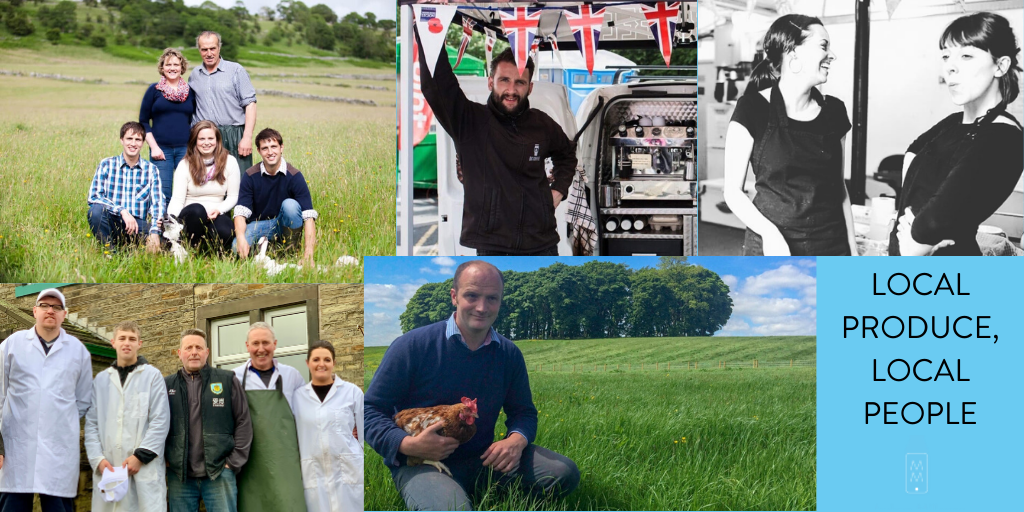 We’re all about shopping local, and we try to source our produce as locally as possible. That’s not just because it sound’s nice, buying from Farmer Dave down the road. It’s because there’s a logic to it.

When you make the decision to buy local you’re contributing to the improvement of the local economy. Research shows that 63p in the £ spent in with a local producer will be kept in the local economy, but only 40p in the £ when you shop in a national chain. Right, that’s enough of the research chat!

There’s pride and good advice. You’re talking to people who know about what they’re selling, in great detail. They’ve probably visitied the farm, they might even be mates with the farmer. You probably won’t even have to ask where it’s from, they’ll be so proud to tell you and you’ll be able to discuss with them how it’s been produced.

It’s ethical. Buying local produce means you aren’t getting your hands on something that’s been shipped half way around the world where there’s a local alternative, and you can bet that the quality of the product will be out of this world! They’ll likely use stuff that’s naturally in season too.

Packaging will matter. You often find that shopping local means less packaging, because the product is fresher and hasn’t had to travel as much.

You’ll be supporting local entrepreneurs and jobs too. Which is obviously a good thing.

There’s a tonne of reasons to support local producers, and we hope you’ll join us on the journey as we try to do just that!

Time to ditch the chemicals under your sink?

How to keep your milk cool

Can we ever go back to living without plastic?

But 'p*#s-soaked cardboard’ was a bit harsh